The Porsches 2 Prescott gathering was held on May 20-22nd. Approximately 90 Porsches attended the car show on Saturday. They were parked on Cortez Street along the Prescott downtown Courthouse Square, the gleaming cars and beaming owners spent the day greeting the public and sharing their stories. We also had two exciting drives, an amazing private car collection tour and a fantastic banquet, which made for an event that pleased everyone. Participants from 6 PCA Regions enjoyed a full and enjoyable weekend.

Here are some comments from the participants:

“Our sincere thanks to the committee for all the effort that went into this excellent event. Porsches on the square, Saturday evening dinner and the Prescott Vintage Motors tour (events we attended) were all very well planned and executed. Very impressive was the turnout of Porsches on the square both in terms of number and models. Great cross section of models from older air-cooled 356s, 911s, & 914s, to early water cooled 928s and 968s to current generations of Boxsters, Caymans, Cayennes and 911s, all displayed with pride of ownership and PCA friendliness.“

“I remember an AZPCA Facebook post: “You’ll join this fun club for the cars…but you’ll stay for the people! Explore what the state of Arizona (and adjoining states) offers…and make great friends…all while driving the car that makes your heart race! :-).” For me, the Porsches 2 Prescott event fully supported that statement! I just
attended the Saturday Show, which started with meeting some new people at breakfast in Phoenix; followed by an enjoyable drive to Prescott with some 20+ cars. It was a beautiful day in Prescott for a wonderful gathering of over 90 Porsches and an opportunity to talk with old friends and meet a few new ones. One particular new
friend I made is a member from Prescott and we quickly determined that we shared many commonalities, the most fascinating being that we had both lived on the Northside of Chicago only one block apart. In fact, as a child, I actually played in the house that he would later own.” 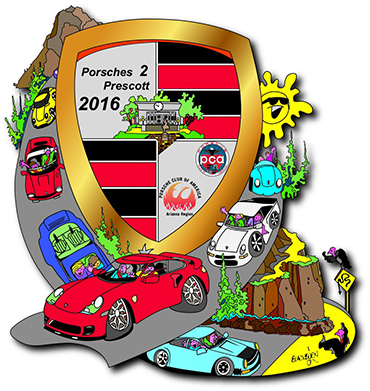 “After being consigned to I-10 commuter duty every other day, our Boxster reminded us of what Porsches are actually all about. It shook off the traffic blues with a great, guttural snarl and attacked the magnificent driving roads around Prescott. The road designers must drive Porsches too, since they built in wonderful rhythmic swoops, quick straights, and hard lefts and rights. Fantastic. We finished Sunday’s run around Bagdad on roads that I think were paved burro tracks, all whoops and blind spots. Then, the real climax for the weekend, when a Yavapai Sheriff ‘s Deputy’s flashing lights showed up in my rear view mirror. He’d seen the Porsche parade, turned around and rounded up this stray. Fortunately, he was very friendly and polite, warned us that cattle sometimes wander across the road, and sent us on our way.”

“What more could have possibly topped off a great weekend at the P2P event up in beautiful Prescott. Waking up on a gorgeous Sunday morning the club headed over to a private collection of cars owned by Dr. Matt Frankel. Being a resident of Prescott, he and his wife were gracious enough to open their beautiful building that held the most magnificent display of cars. Talk about a man cave! This was every little and big boys dream. Thank you Dr. Matt for your hospitality and incredible display.” 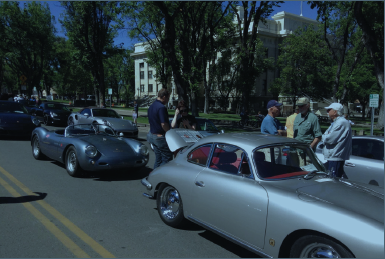 “A very well run, well done event gents. I appreciated the time and spacing between happenings. Very casual and relaxed. The private auto collection tour on Sunday was a big hit for me. Brought back a lot of memories.”

“I thought it was a nice touch that arrangements were made with the City of Prescott to block off an important street for display of a big bunch of Pretty Porsches. It was also nice that a city walking tour had been organized with great volunteer guides. The visit to Matt Frankel’s car collection was excellent.”

Thanks to the organizing committee for their hard work in planning such a great event: Gwen Army, Dick Beers, Donny Blackburn, Bob Frith, Bill Klabo and Ann Reynolds. 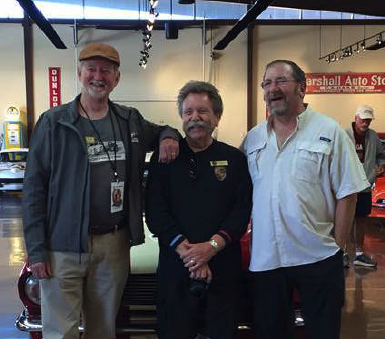 The charity for the event was the Yavapai Food Bank. We received a thank you letter from their Executive Director, Ann Wilson:

“The Yavapai Food Bank thanks the Porsche Club for their contributions to Yavapai Food Bank through their car show held in Prescott on the Courthouse Square on May 21, 2016. We want to thank them for the 900 lbs. of food they collected at the event and for the monetary donations amounting to $3,300. This food and cash will help feed at least 500 families for a week, for which we are very thankful.” 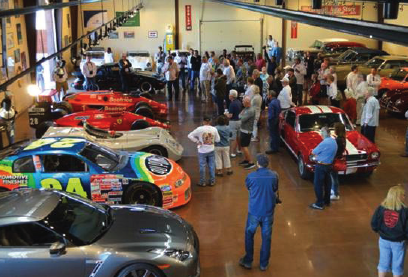 Takin’ the Twisties to Prescott

Board of Directors Meeting